A Jewish Christmas wish: Let’s replace replacement theology once and for all

Written by Scott A. Shay

Jews of my father’s generation, at least a good deal of them, dreaded Christmas. Today my family enjoys the holiday, fearlessly feasting at Chinese restaurants. Jews and Christians now live and celebrate in peace because Christians have largely abandoned replacement theology.

This Christmas I invite Jews and Christians alike to celebrate this abandonment but also to fight replacement theology, a poisonous ideology, where it stubbornly endures: in the alt-right and the far-left. 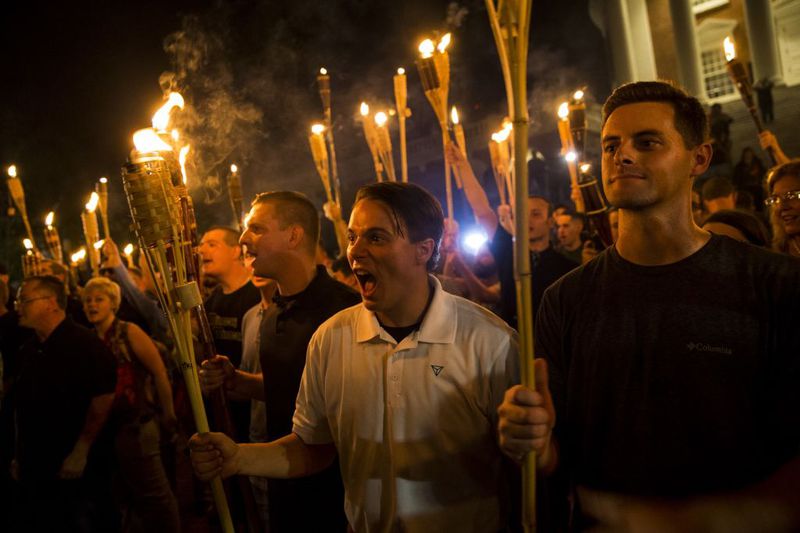 Peter Cvjetanovic (C) along with Neo Nazis, Alt-Right, and White Supremacists encircle and chant at counter protestors at the base of a statue of Thomas Jefferson after marching through the University of Virginia campus with torches in Charlottesville, Va., USA on August 11, 2017. (Anadolu Agency/Getty Images)

As an American citizen, I live with Christians in openness, cooperation and mutual respect. My business career has been blessed by my longtime partnerships with Christians like Lew Ranieri. My intellectual life has been enriched by Christians such as Alvin Plantinga, Kenneth Kitchen and Karen Armstrong. Discussions with Christian (as well Muslim) clergy about the God of Abraham for my book on atheism and religion were truly inspiring.

I have educated my children seamlessly as Jews and Americans. I have the opportunity to appeal to fair courts and to pursue my business and intellectual pursuits without worrying that my property will be ceased or that I or my family will be murdered by my neighbors.

Not so for my father and his family of Sveksna, Lithuania. They lived a segregated life as a second-class citizens. Jews were excluded from local leadership and couldn’t count on it for protection. On Christian holidays, they would stay out of sight. During the Passover in 1922, a blood libel charge led to serious pogroms.

When my father was a child, the town’s rabbi was accused of murdering a Christian child to bake his blood into matzo. When the boy showed up in good health, the libelers said that the Christian boy had been returned by the Jews out of fear. In 1941, my father’s Christian neighbors joined in the killing many of Sveksna Jews. They stole all their property, even the gold from the teeth of the murdered. No Jews remained in Sveksna after the war.

The difference between my father’s neighbors and mine is replacement theology. For centuries, most Christian denominations taught that Christianity had replaced Judaism. This meant that: 1) Christianity is different (no recognition of its Jewish origins or common values); 2) Christianity is correct (no mutual learning or respect); and 3) Christianity is to rule (Jews are to be subjugated, not respected).

Under replacement theology Jews survived, sometimes barely, but only to the extent that they were politically oppressed and spiritually dismissed. Abandoning replacement theology leaves room for Christians to recognize Jews as a people and as a religion to be respected, explored, and supported as local citizens and in the country of Israel.

The white supremacists in Charlottesville’s Unite the Right rally chanted repeatedly, “Jews will not replace us!” (as though Jews had a conspiracy to rule America). On progressive programs like “Democracy Now!” Israel is called a white supremacist, settler colonial state that is replacing Palestine (as though Jews had no history in the region and Arabs had no imperial past).

Like the Christians of old, neither the alt-right nor the far-left has any place for Jews, Judaism and the Jewish national liberation movement known as Zionism. While the alt-right would like to get rid of Jews completely, the far-left is content with them conforming to their political agenda. UK Labour leader Jeremy Corbyn bizarrely called Hanukkah a holiday about welcoming refugees and used Passover as a holiday to call for an end of Jewish independence.

My concern is these two movements have a young base. The internet has allowed the alt-right to flourish. Universities and radical political organizations, including factions within the Democratic Party, are now the center of left-wing replacement theology.

This Christmas and Hanukkah season, Jews and Christians should celebrate how much we have achieved in the last 70 years. But the danger of replacement theology can’t be ignored. When this theology becomes public policy, it leads to horrors against humanity.

Scott A. Shay is the author of In Good Faith: Questioning Religion and Atheism. Scott is also the co-founder of Signature Bank of New York. Visit scottshay.com to learn more.

Article was originally published in the New York Daily News.

Noah Warns Us On Climate Change

Re-understanding The Story Of Job In 2019